As a concerned citizen,
It would not matter now whether the person writing this is a male or female because thinking over that would be very trivial though,but the matter concerned is quite grave.

National Commission for Women(NCW) works to protect and foster rights of women in this country.Innumerable attempts have been carried out by your Organisation as well as the Government of India to safeguard women’s rights.A strong wave of feminism has taken a strong shape,which is definitely hard to be suppressed.The masses have started beginning to know a totally different face of today’s woman viz strong,independent and the one worthy of taking her own decisions.Social media also has supported in this regard.There are a lot of posts on social media,be it pictures or videos,depicting the changing shape of the position of women.Now,women have started striving for equality.Indeed the purpose of your Association seems to be solved.Good.Very well!

But let us give it a thought the other way.I had written till now as a concerned female citizen of India.It is now the turn to see this issue from the eyes of a male.Let us imagine a scene where a long queue waits outside a bank ATM,it would have been a common sight in the recent Demonetization drive.A long queue,of only males,is standing and everyone is waiting for their turn.Suddenly ,a woman approaches and asks may I go first and withdraw the money.Now the person refusing her would be considered extremely ill mannered and the crowd could even abuse him for all this.Consider another scenario of a Delhi metro train.The train stops at a station.A lady enters and is offered a seat by a man who was sitting,not by his will,but by the repeated urges of the fellow passengers.

So the concern is would this situation continue or can even grow?If a person is judged on the basis of his/her abilities,then why is the wall of gender coming in between?On one hand,you talk of equality for women and thus support equality,being a strong supporter of feminism here.On the other hand,you start seizing what is with the men and start giving it to the women.This is what is called Feminazism.
The lady savaging that bank queue had to wait outside for her turn because the persons already standing there were also leaving their works for the purpose.The lady offered a seat in the Metro had to wait for an empty seat as she had entered the Metro train late.

Now,this is what is called hypocrisy.You cannot just make one class of people superior to the other class in the process of making them equal.So,a grave concern is hereby drawn to start some work in this direction too,otherwise the very name of your Organisation would not be proved.It would soon convert from RIGHTS FOR WOMEN to POWERS OF WOMEN.

An open letter to Dearest Maa 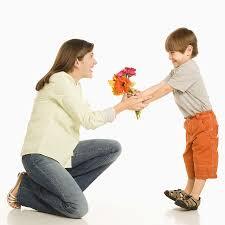 You would always be awake when I would wake up. You would already have taken bath and would be preparing breakfast for me. In fact as far as my memory lane goes, it would always be you who would wake me up. I would groan, "Please just another five minutes, Maa", which would never seem to get over. But, you would bear with this stupid boy of yours and run after him no matter what.
You would then coax me into brushing my teeth and going to take bath. You always knew that I didn't like to brush my teeth every morning, but you simply had those red angry eyes, which were enough to get me doing whatever you said. Within the next fifteen minutes, I would be immaculate and bathed. But, in the meanwhile, you won't be sitting idle or taking rest.
In this short gap, you would already have ironed my uniform and packed my lunch for the school. You were always blazing fast when it came to my needs. You never said, "I don't feel well, so I won't be able to cook lunch today. Grab something to eat from the canteen." You simply placed me over every other thing on this entire planet. Even above Papa and yourself.
And, then you would feed me the breakfast with your own hands. I know that it must have been irritating at times when you had a number of household chores to address. But, you always managed to feed me anyways. Why? Because I won't eat otherwise. This imbecile did put you through a lot of trouble, but you never complained.
And, this was the story of every morning for over twelve years of my school life! That's a huge sacrifice you made to groom me and provide me everything I needed. In fact, not just one but it was a series of countless sacrifices.
You could have slept an extra hour every day. But you didn't. You could have invested all of that time to exercise or do yoga, which would all have helped you and boosted your health to significant degrees. But, you never even thought of it. You took the task of placing my needs above yours as a pleasure. And, it was this altruist investment of yours that built me so perfect, Maa!
And, what I mentioned above is just the morning routine which had become a daily ritual for years and years. You would run after me to complete the homework. You would push me out of the house when I won't turn off the television. You would then also drag me back to the home, when I wouldn't wish to return home from play and do my homework.
Thoughts about me had cluttered your life and your mind so virulently, that all you ever thought about was me. Did I eat the lunch? Did I drink the milk? If I didn't, then you would heat it up again so that your dearest "Jaya" ate only what is healthy and best for his body. Oh! And, how can I forget the times when I got sick.
Those were the moments when I saw the sides of you that I had never earlier been exposed to. You would cry for I was vomiting. You would sit next to me the entire time. You would mix the medicines in sugar water as I found it to be a horrid experience to consume allopathic medicines. You would feed me water, wash my vomit, and change my clothes and what not!
I was only a liability which was in toto dependent on you. And, you never made me regret or grouse over that dependence. You not only dedicated yourself to me and my development. But, you left everything else in the world that would have needed your attention if I need you at the same instance.
No doubt, I made you cry a lot. I didn't score well at times in the examinations. I lied to you when I was caught cheating in those examinations. I got angry on you for I was not able to cope up with the hormonal changes that puberty had hit me with. At times, I made you feel disgruntled and shame in public. And, I can go on and on and on with such examples when I brought tons of misery into your life.
But, you never accepted any of those to be miseries. Rather, you always said- "It’s just a phase of learning and it shall pass. And, once the phase passes, my son will learn those crucial lessons of life, shine and make me proud."
Maa, it was this belief in you which never shook. You believed in your son's abilities no matter. I know I have made you wait a lot to show that gratitude and love which you always deserved more than any other person in this entire world. But, today I acknowledge that I was an imbecile to do so.
Dearest Maa, you brought up a beautiful child and fed him with values and tenets of being tenacious, honest and a man of integrity. And, today I can tell you that your son is strong on all of those pillars. And, none of this would have been a reality had you not waited so long for me to be bloom into this beautiful form.


You are my moon and I am your star. No matter how many obstacles may try to hamper our connection, we are meant to share the same space and that is all what matters. If this star ever again moves farther from the moon, remember that belief that you have had in you to this very moment- "I will come back to you no matter what. And, every time I will make you proud."
-Jayant Shilanjan Mundhra
Posted by Uthaan at 07:52 3 comments:

First of all I would like to start off by stating the fact that I am nearly obsessed by your Harry Potter franchise. I religiously follow all updates and new additions to the Harry Potter world, eagerly swallowing up all nuggets of information that you provide now and then. My love for your writings started when I was 13 years old  , and now 7 years later it hasn’t waned , even though I am an adult now. I wouldn’t be exaggerating when I say that my love for reading started after coming across your masterpiece.  The magical world that you have created out of your imagination is brilliance personified . Sometimes I wonder whether you are not a witch yourself , and are violating the International Statue of Wizarding Secrecy by revealing the secrets of the wizarding world to us muggles . But alas , reality has a stronger grip on me and I know that cannot be true, regardless , that does not stop me from making my gullible younger brother believe that I am a witch in hiding .

Your novels not only transport us to a fantasy world,far beyond our reach , they also teach us lessons in humanity . The underlying theme in your novels is quite a strong one . It has taught me the values I ought to cherish and nurture . It has taught me that evil can not be defeated by even more evil, for love conquers all . The darkness and misery resides in all of us , it is up to us , whether we embrace it and let the cantankerous rot seep into our mind and soul turning us angry and bitter towards the world , harming ourselves in the process . Or we can look outwards and let the beauty of the universe heal us . The character that fascinates me the most is Professor Snape . Surprising as my choice may seem to you , I think he possessed the strongest character in your novels . He managed to turn his strong dislike towards the Potters and decided to protect Harry till his dying breath, all for his love for Lily. This impressed me the most , for this is never an easy thing to do . I am inspired by you , since you fought against poverty and recent estrangement by your husband , and still came up with such a wonderful story.

You are an inspiration to all of us Potterheads . I also want to applaud your charity efforts through Lumos . This is not something many do after achieving success , especially authors. I wish you success in all your further endeavors .