Freshers party is the most awaited and memorable part of every college student's life. They wait eagerly for this party. In this, freshers (or 1st year students) introduce themselves or show their individual talents to the other people so that they can communicate with their seniors because  seniors are the ones who will help them in future.

"PARICHAY", the welcome party for first year students of IPG was organised by our immediate seniors on 8th October, 2016. The evening marked induction and integration of new entrants into the IPG family. We saw very enthusiastic participation by first year students of IPG that evening. They showed their talents by singing melodious songs , performing dance on old songs, new songs ,on dance forms like bollywood , semi-classical, locking and popping. Thus, on the basis of their performances students became freshers faces of ABV-IIITM ,which were selected by an eminent jury and were awarded the titels as indicated below:-

The results were announced by Dr. Anurag Srivastava. The titles were conferred by last year's Ms. Parichay and Best Performer. In this party we also saw a fantastic dance performance given by the newly made dance club of college named CrowD's. One of our senior sir played Tabla which was awesome. Thus, these all performances made PARICHAY a soulful evening.

Uri is a small town located near the Jhelum river in the Baramulla district of Jammu and Kashmir.On the tragic day of 18th Semptember at around 5:30 am 4 militants  attacked an Indian Army brigade headquarters in Uri.The crossfire continued for 6 hours wherein  all the four terrorists   were decimated  but which resulted in heavy casualties for the Indian Army as well. 17 army personnel of ours were martyred  and around 19-30 soldiers have been reported to be injured.This attack came at a time when Jammu and Kashmir is already reeling under social unrest and there are daily clashes between the police and the people.These protests too, have been spurred on by the radicalization of the people,primarily the youth,by the militant groups active in Jammu and Kashmir.
The Uri attack  was widely condemned all over the globe,with the Ministry of External Affairs boycotting the SAARC summit that was to be held in Islamabad,Pakistan.Showing solidarity,Afghanistan,Bhutan and Bangladesh withdrew from the summit as well. Pakistan predictably denied any involvement despite the various proofs that corroborated the fact that the militants had been of Pakistani origin.From the 26/11 Mumbai attacks to the recent Pathankot attack Pakistan continues to turn a blind eye towards the rising terrorist activities  perpetrated towards India ,by the militant outfits growing on its soil.The Peshawar school attack appears to have done nothing to change our neighbours attitude,either.Merely stating that they are against war, everytime such incidents occur, is not the solution.Such a lackadaisical approach indicates that in all probability the Pakistani government itself is hands in glove  with the terrorist groups and thus cannot be relied upon.Despite receiving flak from all parts of the world it continues to hold fort and has counter accused India of financing terrorism in Pakistan.Perhaps Indias continuous efforts to resolve all issues peacefully have convinced the country’s  government that we cannot take matters into our own hands.
This misconception must have been cleared when the Indian government organized a covert operation against the militants in Pakistan.A surgical strike,the first of its kind,was carried out in the wee hours of 29th September on terror launch pads along the LOC . Intelligence Bureau records, one released on September 30 for a scheduled inter-agency meeting in New Delhi, spoke  of a  major build-up, saying up to 40 jihadists had massed in Kél, facing India’s Machil sector. This unusual number was interpreted to be a preparation for a last-ditch infiltration push before the passes closed in early winter. This operation was in response to the terrorist strikes on Indian soil.The number of casualties on either side is still unclear due to the secrecy shrouding the operation .Initially, Pakistan persistently claimed that the predawn strikes never happened but after eye witness accounts and the surfacing of the  video footage of the strike they reluctantly admitted to the occurrence. The Indian Army was lauded for its bravery and dedication throughout the country. This manoueuvre has the benefit of indicating to the terrorist groups that they are not impregnable by the Indian Army, just because they are on another soil.
The news of the surgical strikes led to some quibbling between the incumbent  government and the opposition,which was to be expected ,given our country’s usual political scenario.  Shri Narendra Modi,our Prime Minister,declared that India will now start working towards globally isolating Pakistan and would continue to push to make it a pariah state.This  seems to have rattled the Nawaz Sharif government  and information resources state that a top secret meeting was held wherein the Pak army was ordered to take visible action against the terrorist groups.Terrorists have no nationality and no religion,they are a threat to humanity and must be eliminated and this can only happen when all countries work together and strive for the same. 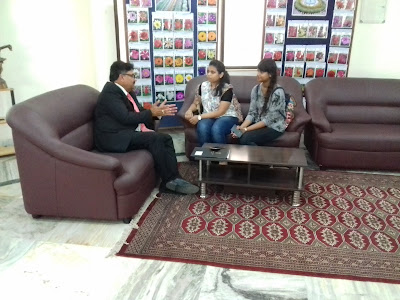 Q.    How was your experience today?
A.  It was nice. Basically I love meeting young people. I reached yesterday and walked through the city, it is a historic place. Here in this prestigious institute, I planted a tree and specially when we are about to sign a treaty on climate change on October 2nd.They showed me the kind of flora and fauna they have which is amazing apart from technical skills.
Q.   To start with , what are your views on constant degradation of rupees  as compared to other foreign currencies?
A.  It is not always a bad thing. Currency of a country indicates its purchasing power. In India with the growth in economy, majority of our imports are dependent on oil i.e. 60 – 70% for which we need foreign exchange. We have a system where the Reserve Bank of India keeps on managing the currency. Secondly, if rupee was very strong it will add import cost which will cause trouble for Indian exporters. Today purchasing power of rupee is much more than many other currencies and so it is sometimes good to keep our currency low.
Q.   Are you in favour of Mr. Narendra Modi’s policy of “integrating neighbouring countries”?
A. His policy is –“India first” which is very important. He has created “Act East Policy” under which all the south east Asian countries are being  brought into a closer engagement. He started “neighbourhood first policy” as we have to deal and grow with them. If our neighbourhood started creating problems it would be a setback in our developmental plans. First he invited all the leaders of the SAARC countries in the swearing ceremony and now he is trying to have good relations with Russia and America.
Q. How does tying up with foreign countries affect our national security?
A. Security is of different types- economic security , physical security. We are trying our best to have good relations with China although China wants to support Pakistan mostly. Modi says-“We can’t sit by the shores counting the waves. We have to go and stir.” India being a very large country has 1.3 billion people  to provide economic prosperity which can be achieved by foreign collaborations only. We have a permanent security if our neighbours are not willing to go on wars with us. To create peace we have to maintain relations with other countries.
Q.  How can the problem of unemployment be solved by setting up manufacturing units in India?
A. “Comparative advantage” is some having raw materials, some having man power, some has technology and all this when combined can produce industry which will provide employment. 65% of our GDPA comprises of service sector/IT but they do not provide that much job facilities as manufacturing units. Majority of Indian population is less than 30years and to provide employment to them we are having schemes like “Make In India”, “Digital India” etc. but to eradicate unemployment completely is not possible.
Q.  The government has not been able to complete the 5yr plan of foreign policy. How far do you think corruption plays the key role?
A. Corruption is the unfortunate part and we have no justification for it. We must have some strict laws to control black money. We must have tax regimes which encourages people to pay tax i.e. self-compliance. GST has come already. Those upper strata people who continue to indulge in this should be subjected to harsh punishments.
Q.  Where do you see India in the next 10 years following the current foreign policies?
A. I see India at the top and we can reach there. We are already the fastest emerging economy in the world at 7.5% GDP. We are 1/6 th of the world and they cannot ignore it. We have been a leader and as a diplomat I feel we will be the leaders. We are in space and are among the six countries in the world that have sent 8 satellites. We send the largest no. of satellites to European countries. It will take time but we will reach there.
Q.  Any message that you would like to give us or any tagline for our campus?
A. Work hard and you will be there. That’s what I think ….there are no shortcuts in life. 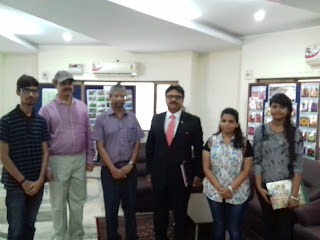